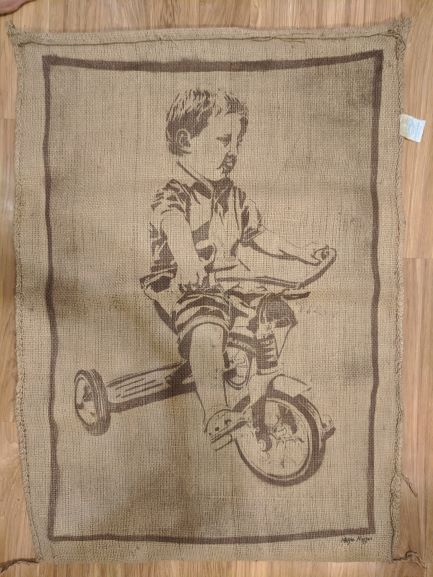 Liam child tricycle artwork captures a young boy’s joy of riding a classic tricycle – that first freedom of movement and direction with rolling speed. Megan captured the image of the boy riding the tricycle from our neighbor’s young son riding his classic tricycle on the driveway and narrow street as the snow melted away into the warmth of late-spring in the Colorado mountains.

Liam was one of the first Coffee Art Prints by Megan Morgan debuted in Steamboat Springs, Colorado 2009.  The delicate hand-cut stencil was hand applied to a re-purposed burlap coffee bag ‘canvas’ creating the uniquely warm & tactile artwork. Megan created a hand cut mylar stencil of her Liam artwork using an electric stencil cutting tool – while more durable than the Bottecchia paper stencil it remained fairly fragile, especially within the finer detail elements of the artwork. The final Liam artwork template was laid upon a repurposed coffee bag to allow Megan to transfer the monochromatic artwork with an earthy brown spray paint directly to the burlap canvas.

Jump over to our Online Store to purchase one of our last remaining Liam burlap prints – the original child tricycle artwork template was destroyed several years ago.

Did you know the tricycle predates the first bicycles – with an early design appearing in the late 1600’s? Jump over to Wikipedia for an interesting history of the Tricycle.